Bitcoin is on the heels of its previous all-time high above $60,000. The price is currently consolidating, but fundamentals indicate that it is a matter of time before the BTC price returns to its discovery phase in uncharted territory. At the time of publication, Bitcoin was trading at $58,378 with a gain of 0.2% in the last 24 hours. On the weekly and monthly charts, the gains stand at 1.4% and 19.1% respectively.

Before a new all-time high is reached, however, there is apparently one last hurdle to overcome. IntoTheBlock’s In/Out of the Money Around Price (IOMAP) currently suggests a strong resistance between $58,879 and $59,241. As shown in the image below, 220,000 addresses bought close to 73,000 BTC at those levels. If Bitcoin manages to rise above the referenced resistance, “the skies are clear for new highs”.

In support of the bullish case, Glassnode analyzed Bitcoin’s historical performance based on its Market Value to Realized Value (MVRV) ratio, a metric that tracks the “interaction” between speculators and hodlers. The indicator is drawing a super bullish picture for Bitcoin:

Long-Term Holder MVRV at 20+ has been a good indicator of #Bitcoin market tops in previous cycles. Currently at 10, it indicates room for more upwards movement. $BTC was trading at ~$4,500 at these levels in 2017 – and made another 4.4x to the peak. 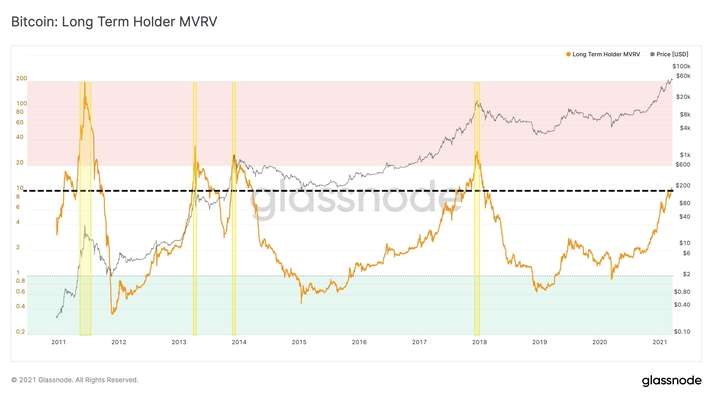 Perhaps the most bullish data is the amount of BTC on exchange platforms. Glassnode co-founder Yan Allemann believes that the cryptocurrency’s recent price action has not affected investors as they continue to withdraw their BTC from exchange at “astonishing rates”. Bitcoin is becoming a more illiquid asset as investors prefer to hold it.

Despite recent volatility, #Bitcoin supply is still drying up at astonishing rates for this time around in the cycle. https://t.co/yslda1jUha pic.twitter.com/y1SInrBjEF

As analyst Willy Woo shows, the supply shock coincides with the increase in money printing by the Federal Reserve in early March. Woo presented data that allows him to draw three fundamentally bullish conclusions for Bitcoin: speculative BTC holdings on exchanges are depleted, USD printing will continue, the number of “weak” BTC holders is declining. The analyst said:

IMO what’s happening is US institutions and HNWI are scooping up the available coins from weak hands and locking it up as strong HODLers in response to monetary inflation. Coinbase BTC supply dropping off a cliff suggests US institutional buying there.

The interest of large and institutional investors is also reflected in the Bitcoin ETF approved in Canada. At $815 million, assets under management reached a new record yesterday, as reported by Lex Moskovski.

Imagine what U.S. Bitcoin ETF will be capable of. pic.twitter.com/mnS5zsA8l9

Also, open interest on the Bitcoin futures market hit an all-time high during the week to stand at $23 billion. On the Chicago Mercantile Exchange (CME), a platform for institutional investors, open interest shows significant growth.

Der Beitrag With Bitcoin facing $60,000 – This is why a new high is imminent erschien zuerst auf Crypto News Flash.