Researcher Leonidas Hadjiloizou has done an extensive research on the XRP escrow accounts of Ripple. There are many myths about this escrow’s operation and the impact it has on XRP’s price performance. Hadjiloizou has set out to clear them up.

The researcher begins his report by outlining exactly how the escrow works. According to his findings and the explanation made by Ripple’s CTO David Schwartz, the escrow is an XRP Ledger feature that allows an entity to program payment for an amount of the token. This XRP remains “locked-in” until the conditions are met.

Ripple created 55 escrows in December 2017, locking up one billion XRP in each for a total of 55 billion. One of these escrows expires every month and Ripple has access to the funds. In its latest move for March, Ripple sold 100 million XRP and returned 900 million, the researcher stated:

In addition, it was determined by Hadjiloizou that Ripple created 11 different wallets to hold the escrows. Hadjiloizou stated that of the original 11 wallets, 8 have been emptied, but Ripple has created 8 additional wallets. With this, Ripple “makes sure” that each escrow holds a minimum of 1 billion XRP. The last escrow created by Ripple has an expiration date of April 2025, the researcher states:

Contrary to the belief that has become popular, Hadjiloizou believes that Ripple has been transparent with its sales and all escrow-related activity. The researcher presented the graph below showing that Ripple had its highest period of XRP sales during the third quarter of 2018 through the second quarter of 2019. 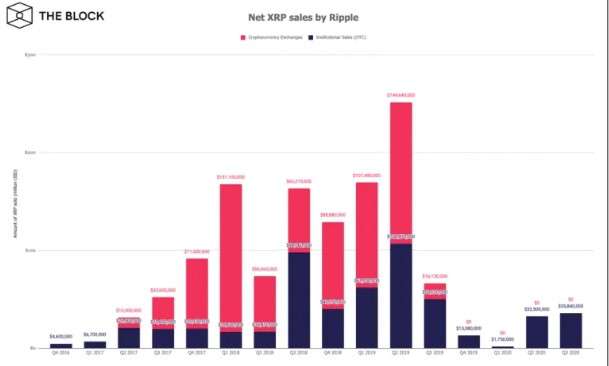 After that period, the payment solutions company adopted a “more conservative approach to its XRP sales.” Since then, sales of the token have slowed considerably as the graph shows. Ripple’s strategy has been to expand the number of RippleNet members which use the XRP based On-Demand Liquidity Hadjiloizou concluded:

Whenever you see a news outlet claiming that Ripple is about to dump 1 billion XRP, you should know that that is never the case. (…) Ripple continues to focus solely on its over-the-counter (OTC) sales with a few strategic partners, who are building XRP utility and liquidity in strategic regions including EMEA and Asia.

I Stand By My $100,000 Bitcoin Price Target, Anthony Scaramucci