Bitcoin is starting the week at a strong pace after a boost in the last two days. At the time of publication, the cryptocurrency was trading at $58,007 with a gain of 4.3% in the last 24 hours. On the weekly and monthly charts, BTC is posting gains of 0.7% and 24.6% respectively.

Trader Sasinatorr has set a new critical support at $57,000. Sharing the image below, he stated that bullish investors can enter long positions if Bitcoin revisits $59,000. The trader stated:

White horizontal is like the line in the sand which bears should hold. If daily close above and you’d like to long the retest. Close daily below yellow and we’ll survive. 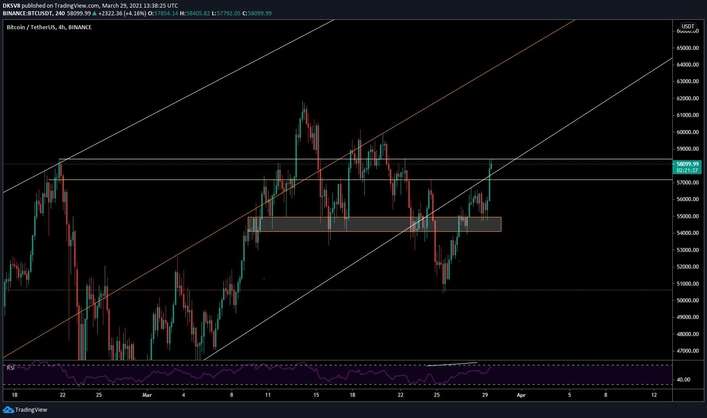 Trader CryptoBirb said that the benchmark cryptocurrency is at a turning point as the price action in the near term will determine whether BTC “will go all the way to $90,000 or if $40,000 will come first.”

Trader Josh Rager stated that market sentiment has shifted to bullish. Therefore, he has set $60,000 as a near-term target if the cryptocurrency manages to gain more upside momentum.

Bitcoin same story, new pullback – people become extremely bearish and were calling for $40k after the 18% retracement. Naturally, Bitcoin pushed back up after the sentiment shift to bearish IMO, looking for more upside here to $60k, will re-evaluate from there.

In support of the bulls, CryptoQuant CEO Ki-Young Ju recorded an increase in Bitcoin outflows from Coinbase’s platform. Arguing that institutions could have bought Bitcoin when it was at $52,000, Young Ju advised investors not to acquire short positions. 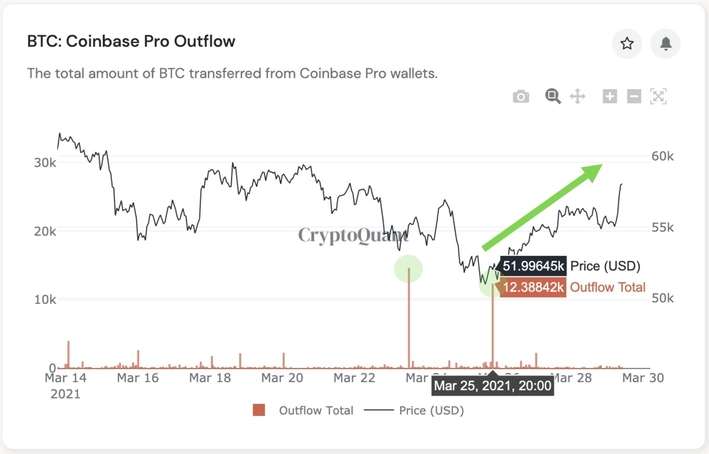 CryptoQuant’s CEO further stated that supply/demand indicators tell that it is time to “go all-in” on BTC. He then added that the reduced supply of BTC on exchanges supports this thesis, according to the stablecoin ratio versus the amount of the cryptocurrency on exchanges:

The crypto market is getting better in terms of supply/demand.

Otherwise, analyst Ali Martinez spotted a price floor. According to IntoTheBlock’s In/Out of the Money Around Price (IOMAP) indicator, more than 1.4 million addresses bought 1.2 million BTC between $52.9K and $56.4K. In addition, he indicated that Bitcoin’s last resistance could be at $58,900 due to 300,000 addresses buying 88,000 BTC at this level.

New U.S. stimulus package and its effect on Bitcoin

While not all households have yet received checks from the first stimulus package approved by President Joe Biden’s administration, there is already speculation that a new stimulus will be rolled out in April to support “infrastructure” affected by the COVID-19 pandemic.

In the past, the increase in dollar supply has favored Bitcoin’s price. In that regard, Glassnode firm co-founders Yan Allemann and Jan Happel said that BTC’s performance for April will be determined by whether the stimulus checks will be invested into markets or used to pay off debt.

Many households now have an extra buffer of income to spend, due to new stimulus checks and decreased spending during lockdowns.

Will they invest this into markets or pay off debt?#Bitcoin‘s April performance will depend on it. https://t.co/UJdLxnfqva pic.twitter.com/xXbEICPjqM