Input Output Global (IOG) has released the node version 1.26.1 for Cardano. According to the specs in the repository, this release will improve performance “significantly” and provide additional features. Cardano inventor Charles Hoskinson has welcomed its deployment.

SPOs this node release is a pretty significant one. Have fun https://t.co/ig8MDGhyTb

Among the improvements, v1.26.1 will eliminate pause time when calculating rewards, reduce the load on CPUs in relays processing many transactions. In addition, the new software includes “many” of the internal changes needed to support the Alonzo hard fork, integrating components for the Plutus smart contract platform.

However, full support for Plutus will be included at a later date. Among the changes included is an expansion of the documentation of Windows builds, tracking KES even when the key has expired, new metrics to measure the number of “lost” blocks, among others in the Cardano API, network, ledger, and consensus. IOG also informed node operators that the database migration process could take between 10 and 60 minutes.

Strengthening the decentralization of Cardano

On the other hand, Olga Hryniuk, a member of IOG’s Marketing and Communications team, outlined the roadmap that will be followed to achieve peer-to-peer (P2P) connectivity. A key element in “strengthening” the resilience of the network and contributing to its decentralization, P2P communications will fulfill the following objective:

(…) enhance the flow of information between nodes, thus reducing (and ultimately removing) the network’s reliance on the federated nodes, and enabling the decentralization of Cardano. To achieve the desired resilience, IOG’s networking team has been busy improving the network stack with advanced P2P capabilities.

The improvements that will be introduced with P2P communications will not require a change in the protocol, according to Hryniuk. IOG will implement a P2P “architecture” to take inter-node communications to a new level of decentralization.

In first instance, they will introduce a series of “mini protocols” to integrate a basis for the “information exchange requirement”. This will allow, for example, a node to give data on the chain status to a peer. Hryniuk clarified:

These protocols include a function to maintain continuous connection between nodes and to receive information about which peer has the best connectivity. The network service will support Windows, Linux, and macOS operating systems.

Although the nodes in the network are classified as peers, they will be divided into cold, warm, and hot peers as part of the P2P governor. That way, it will be known which nodes are active; thus, improving the peer discovery process on the blockchain. Hryniuk stated:

The IOG networking team is in the final stages of quality testing the P2P governor integration with the node.

The deployment of P2P connectivity is divided into 5 steps starting with a test network in early Q2 2021. Then, more protocols will be integrated into the network to add new features to facilitate communication between nodes. Finally, there will be a staged migration to full deployment. 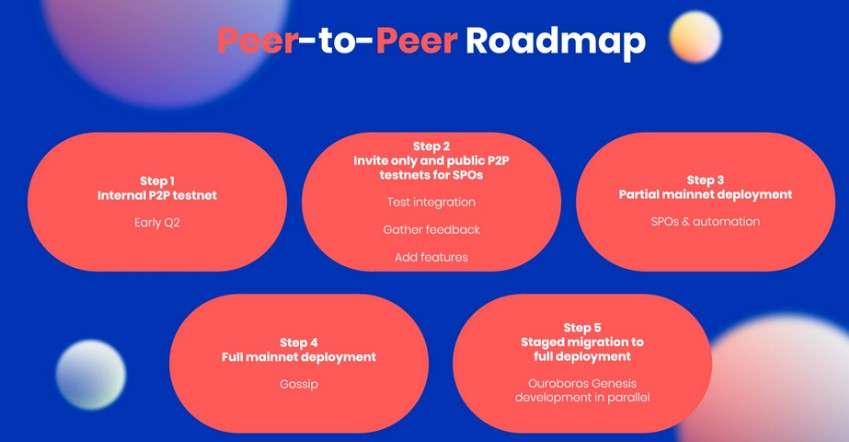 eToro adds Chainlink and Uniswap in nod to DeFi