Hot on the heels of its all-time high, the Bitcoin price continues to post gains after a week of bullish announcements. As of press time, Bitcoin was trading at $59.601, with a gain of 1.5% in the last 24 hours. On the weekly and monthly charts, BTC has posted gains of 15.9% and 22.8%, respectively.

According to TradingView data, Bitcoin has had its best quarter in the last 8 years. It managed to post gains of 15% in January, 37% in February, and 30% in March. The last time BTC recorded a quarter with better gains was in 2013. At that time, the cryptocurrency closed the year with a 451% increase.

#Bitcoin just had its best Q1 in eight years. pic.twitter.com/5pT6yY6gUh

Trader “Il Capo of Ethereum” has recorded an increase in BTC outflows from Coinbase Pro. He stated that “strong” hands continue to accumulate. Over the past months, Coinbase Pro has served as the go-to place for institutions like Tesla to buy Bitcoin.

Data from research firm Glassnode indicates that there are about 2.4 million BTC left on exchanges. Analyst William Clemente has argued that this will drive the market toward a BTC supply crunch that will be felt in the final quarter of the year. This increases the likelihood that Bitcoin’s price will continue to rise throughout the year. On the current price action, Clemente said:

$55k-$60k #Bitcoin is already being strongly validated by capital inflow volume. These are the highest levels of volume seen since on-chain since $10k-$11k last year. Very bullish, don’t expect BTC’s price to stay in this range for much longer.

When will Bitcoin reach its peak?

To answer the question that seems to be on every investor’s mind, analyst “Dilution-proof” shared some on-chain data comparing the current bull-run with that of previous years.

As shown in the chart below, the Puell Multiple still does not reach the levels it did in 2014 and 2018 when BTC price recorded a significant correction. The Puell Multiple was created to “explore” critical points in market cycles and is calculated by measuring BTC daily issuance divided by cryptocurrency’s one-year price average. 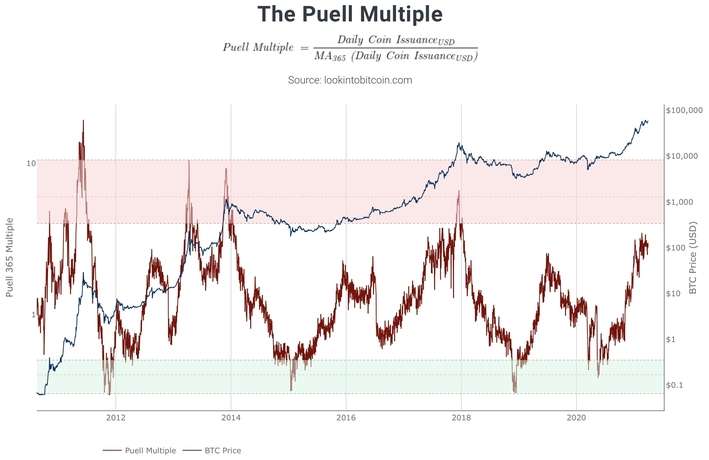 The analyst determined that the amount of Bitcoin miners have sent to exchanges has “declined steeply” to levels not seen over the past year. Consequently, the selling pressure for BTC will decrease.

BTC holders are also showing less willingness to sell their coins, as data from Glassnode shows. In parallel, there has been an increase in the amount of BTC illiquid supply dropping into “strong hands.” Based on the data presented, the analyst concluded:

Complementing the bull case, analyst Willy Woo highlighted 3 key points about Bitcoin’s active supply. Woo believes that old investors sold when the bull market began and that holders less willing to sell are strengthening as the bull-run drags on, and therefore he concluded that price appreciation will continue.

3) check the target HODL levels, very much like the price chart on log scale (climb tapers off), we’ll prob top out in the low to mid 50s; lots more bull market to come. https://t.co/HhaEmHpvuk

Der Beitrag Investors hold on to their Bitcoin, where is the price heading? erschien zuerst auf Crypto News Flash.