The Chicago Mercantile Exchange (CME) has announced the launch of “Bitcoin Micro futures”. In a press release, the entity set the rollout date for May 3 of this year. The entity is currently awaiting regulatory confirmation of the new product which is characterized as an offer composed of contracts with one-tenth of 1 BTC per contract.

The smaller-sized contract will provide market participants “from institutions to sophisticated, active, individual traders with one more tool to hedge their spot bitcoin price risk or execute bitcoin trading strategies in an efficient, cost-effective way, all while retaining the features and benefits of CME Group’s standard Bitcoin futures”.

Since the launch of our Bitcoin futures contract in 2017, we have seen steady, ongoing growth of liquidity and market participation in our crypto derivatives, especially among institutional traders.

Data from the CME shows that more than 13,800 BTC-based derivative contracts worth 69,000 BTC have been traded since the product was launched in 2017.

The introduction of Micro Bitcoin futures responds directly to demand for smaller-sized contracts from a broad array of clients and will offer even more choice and precision in how participants can trade regulated Bitcoin futures in a transparent and efficient manner at CME Group.

Two bullish news in one day drive Bitcoin’s price up

Bitcoin’s price has reacted positively to the CME announcement and PayPal’s extension of their crypto services revealed earlier today. At the time of publication, BTC was trading at $59,166 with a gain of 1.8% in the last 24 hours and 8.8% in the last 7 days. The market cap has returned to $1.1 Trillion.

The sentiment in the market is extremely bullish, as shown by indicators and experts. Trader Michaël van de Poppe believes that the CME announcement will be positive for Bitcoin. Stating that the cryptocurrency faces “final resistance” before rising to $68,000. The trader expects BTC’s price action to benefit the entire crypto market.

#Bitcoin faces final hurdle before $68,000 and that’s this red region.

Going great so far, in which this move is beautiful. Are we continuing already? I’m not sure.

Are we massively bullish? Yes.

Analyst William Clemente III reviewed the miners’ activity and concluded that they have stopped selling their funds in BTC altogether. While miner ramped up selling between $27k-$32k, the selling pressure is steadily decreasing since early February. This indicates that miners are either able to fund their operations by taking on debt or as Clement puts it, “because they know something.” In any case, the metric is bullish. 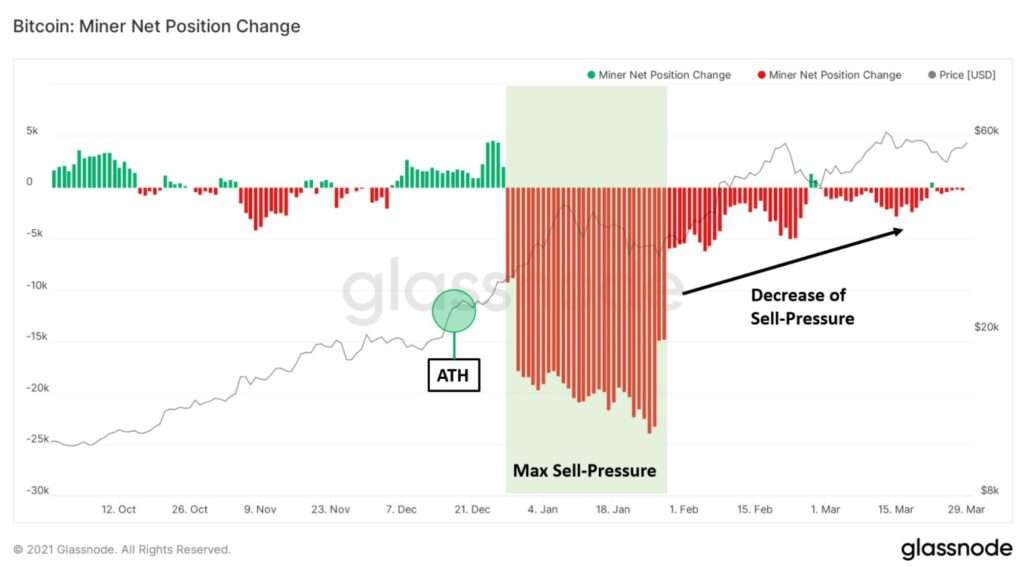 On the other hand, Lex Moskovski pointed out that there has been a significant increase in the funding rate for Bitcoin futures contracts. Based on this metric, the analyst stated that traders are optimistic. This is complemented by an increase in retail demand for BTC-based financial products. Both factors seem to have a positive impact on the price of BTC at the moment.

Funding is at considerable levels again.

DeFi on Ethereum shoots up 200%, but Polkadot and BSC erode its dominance: Report