The cryptocurrency market has recorded a huge price correction in the past few days, with most coins testing some of the critical price support levels. Bitcoin has now lost 15 percent of its value ever since it hit its all-time high just a week ago. The price drop has alarmed many investors who fear the only way now is down. However, according to Lark Davis, a renowned trader, investor and crypto influencer, the top is not in yet.

Davis’ sentiment that the top is not yet in mirrors a number of industry leaders who have called on the crypto community not to panic whenever there’s a dip. Alistair Milne, the founder of Altana Digital Currency Fund, made similar remarks recently. “It is completely normal for people to start thinking ‘the top is in’. It happened 4 or 5  times in 2017,” he stated.

The first indicator Davis cited to support his sentiment that the top is not yet in is the 200-week moving average heatmap. This indicator shows when the market has overheated and when a blow-off top is due. In comparison to the 2017 bull run, we are yet to encroach on the ‘heated’ market cycle.

Potentially, we are still four to six months away from a real blow-off top for the cryptocurrency markets. 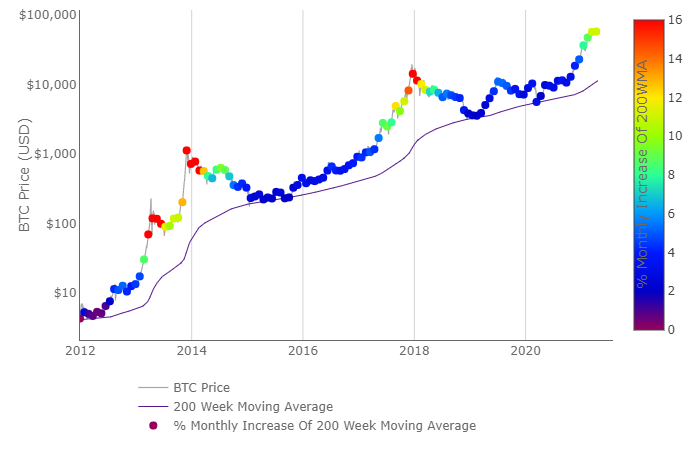 The Puell Multiple is yet another indicator that reveals we are yet to see the top for Bitcoin. This metric looks at the Bitcoin economy, but from the supply side. It explores the market cycles from a mining revenue perspective, with the assumption that miners are likely to sell all their BTC to cover costs.

Actually, it’s more like where we were in July or August of the 2017 bull run. We are yet to get into an area which shows an overbought market.

The 2-year MA multiplier tells a similar story. Every time a blow-off top has happened has been when the BTC price has been above the 2-year moving average x5. This happened in May 2011, December 2013 and most memorably, December 2017. However, it has yet to happen in the current bull run and we’re still short of the blow-off top indicator as per this metric. 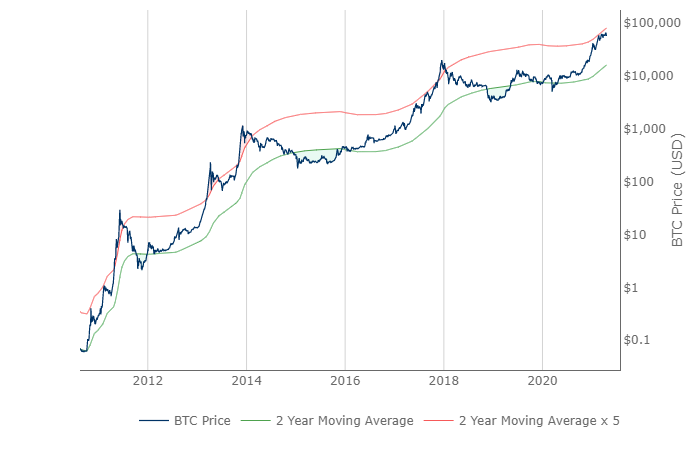 What this looks like to me, this current structure, is very similar to, again, where we were mid-year back in 2017. This indicates once again that we have 4-6 months at least in this particular market cycle before we see a major cool-off period.

The best days are yet to come

Bitcoin is still awaiting some major developments that could lead to a remarkable price surge. None is bigger than a possible BItcoin ETF in the U.S. The country has the biggest stock market, accounting for almost half of all global stock value. An ETF would open up this huge market for Bitcoin and bring in huge institutional investment.

The SEC is still sitting on nine ETF applications from a number of leading companies.

However, investors must be prepared in case Bitcoin first dips further before picking up momentum. “I think the momentum is definitely heading towards a more bearish short-term scenario. However, I believe it’s just a short-term scenario,” Davis told his 278,000 subscribers.

I would not be surprised to see a greater period of consolidation for the next couple of weeks or so until $60,000 is regained. We think bitcoin is going to move higher for the rest of the year, even if we consolidate over the next few weeks.

Der Beitrag Bitcoin top is not in, we still have 4-6 months of a bull run: Elite trader erschien zuerst auf Crypto News Flash.