March has been a historically bearish month for the crypto market, and the performance of the major cryptocurrencies in recent days shows no signs of a change in that trend. Bitcoin‘s price is currently experiencing a pullback after gaining momentum yesterday. However, the cryptocurrency still holds at a critical level.

Many analysts and traders agree that the correlation between the traditional market and Bitcoin’s performance have increased in recent days. One of them is Charles Edwards. Via Twitter, he stated that the correlation between BTC and the S&P 500 is at its highest levels since 2020s “Black Thursday”. Edwards advised investors to keep an eye on news related to the U.S. Federal Reserve, bond rates, and volatility in the stock market.

Along those lines, Deribit Insights analyst Ben Lilly recommends keeping an eye on the Nasdaq’s performance. The analyst expects a drop in this index below its support line to negatively impact BTC’s price. Moving up or holding support will have the opposite effect.

On the possibility that the traditional market will resume its bullish momentum and, consequently so will BTC, the analyst recommended paying attention to possible statements to be made by Federal Reserve Chairman Jerome Powell during the day. Powell is expected to announce a continuation in the policies that were unveiled in April 2020 to withstand the economical pressure exerted by the Covid-19 pandemic.

Particularly, analysts expect to hear updates on the Supplemental Liquidity Ratio (SLR) that determine “how leveraged” banks in the U.S. can be, as stated by “Workedia.” The trader believes that SLR has become “the most important variable” in determining the course of the stock market and the bond market.

Powell has until March 17 to extend Fed policies but could hint an advance during a virtual event with the Wall Street Journal. Workedia believes a “favorable mention of the SLR exemption” will cause a boom in the traditional market and could boost Bitcoin’s price due to its correlation, the trader added:

(Supplemental Liquidity Ratio) fate could mean the difference between a stabilization in the bond market (or) a violent, marketwide crash.

Meanwhile, trader Michaël van de Poppe has pegged the support for BTC at $49,000. If this level is lost, van de Poppe expects the price to continue down to $45,500. Otherwise, there is a higher probability that Bitcoin will attempt to retake $52,000 with a continuation towards $55,000.

Bloomberg Intelligence’s latest report for March states that long-term Bitcoin holders show a low tendency to sell their funds at $40,000. Therefore, the report points out that there is support for further appreciation in BTC price. At the same time, Bloomberg indicates that the current market is far from reaching its top and is more comparable with the 2016-2017 rally:

Our graphic depicts the percentage of total Bitcoin supply transferred on-chain within the past year resembling a similar bottom in 2016. Cutting the daily mining supply in half is the additional connection between 2020 and 2016. Just below 40%, one-year active supply is far from the almost 60% reached in 2017 and 2013, roughly coincident with peaks in the Bitcoin price. 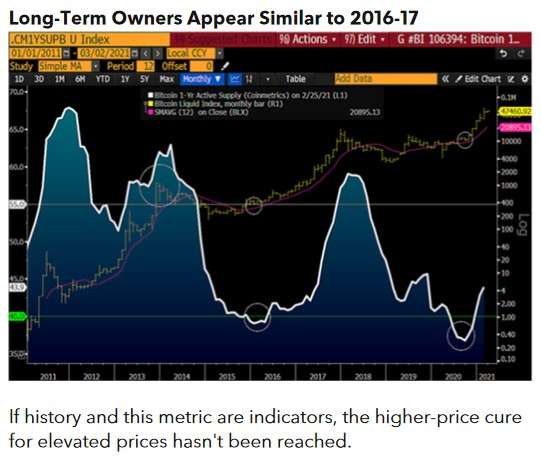