Bitcoin hit it’s all-time high ten days ago at $61,683 and looked poised to continue with its bull run. However, since then, it has shed 11.5% and is now trading at $54,630. According to on-chain data analytics platform Glassnode, the top cryptocurrency has now entered the later stages of a bull market.

Read more of our analysis in The Week On-chain👇https://t.co/JBMUHRb2Bo

In its ‘The Week On-Chain’ report, Glassnode revealed that over the past three years, retail investors have continued to accumulate their share of BTC supply. In March 2018, Bitcoin addresses holding less than 1 BTC, known as ‘sat stackers,’ held 3.97% of the BTC supply. Since then, they have accumulated an additional 1.23% to bump up their share of BTC ownership to 5.20%.

The persistent accumulation of small holders demonstrates a willingness to HODL through volatility with the trend unbroken from mid-2018 through the chaos of 2020. 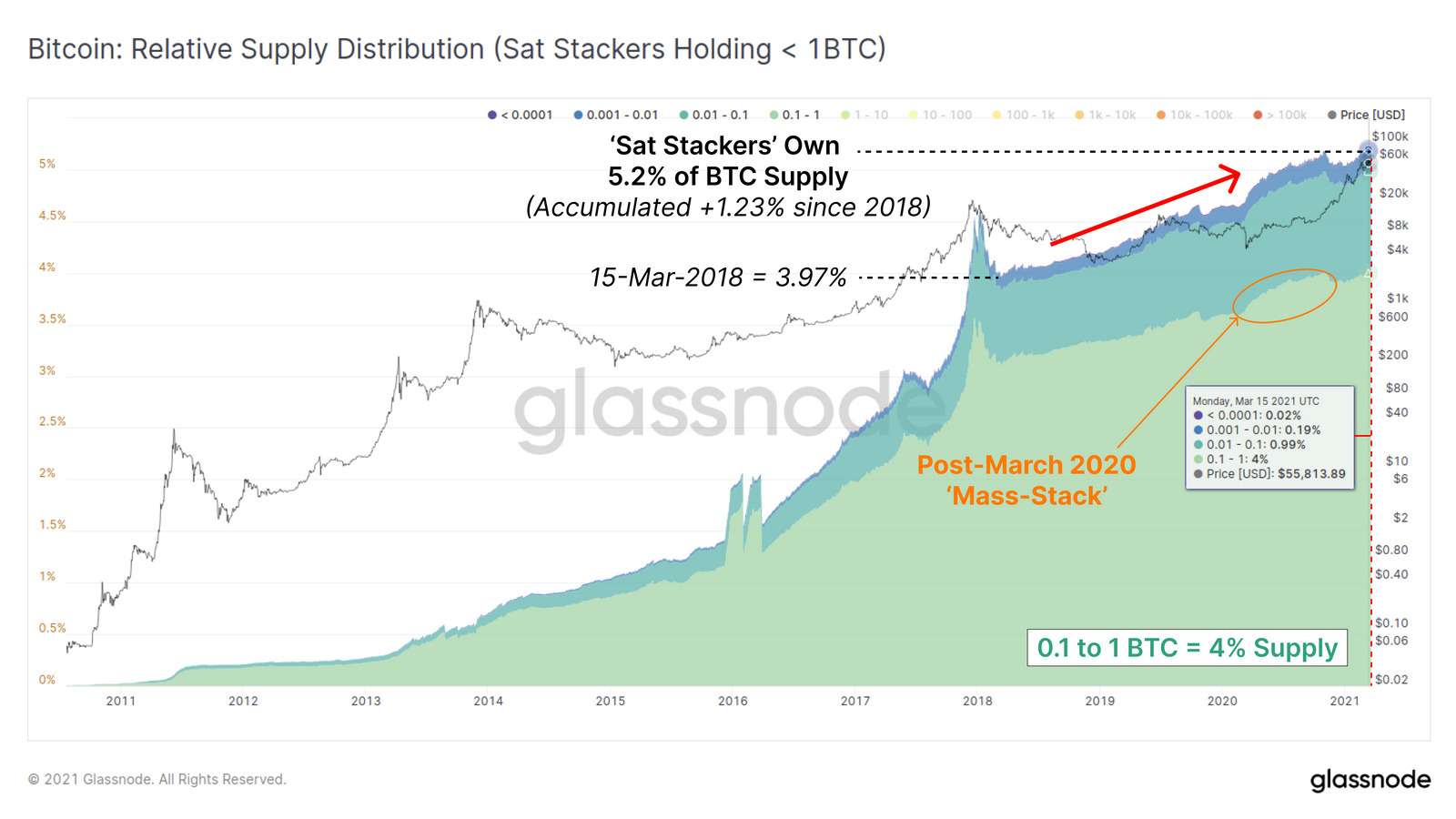 Conversely, as the retail investors accumulated, the whales’ share of the BTC remained relatively flat. These whales now hold 62.62% of the BTC supply.

Glassnode revealed that bull markets generally follow a similar wealth transfer path over three distinct phases. Observing such phases can allow investors to estimate where the BTC market is currently. From its analysis, the firm believes “current conditions are similar to the second half or later stages of a bull market.”

What’s next for the Bitcoin price?

The current dip isn’t one that’s worrying many cryptocurrency analysts. Rafael Schultze-Kraft, the co-founder and CTO of Glassnode, predicts BTC might dip even more before it finds support. He views $51,000 as the first support level that the flagship cryptocurrency can use to reverse the downward trend.

However, this level might not hold and BTC could end up dipping to $47,400. Bitcoin will find its strongest on-chain support at this level, Rafael stated, citing the Bitcoin UTXO realized price distribution chart. This chart shows at which price the current set of Bitcoin UTXOs were created.

Not much #Bitcoin realized between here and $51k. Would not be surprised if we dipped a bit more.

Yet another analyst concurs that Bitcoin will likely find support above $50,000. Known to his 137,000 Twitter followers as Credible Crypto, the analyst believes that BTC bulls will make a stand at the $50,000-$52,000 level. However, if the cryptocurrency breaches this support level, it will likely dip all the way to $38,000 before it consolidates and reverses the trend.

The relative low amount of Bitcoin on exchanges is yet another bullish factor for the cryptocurrency. According to Glassnode data, this week saw the lowest amount of BTC on exchanges since August 2018. On March 21, there were fewer than 2.44 million BTC on exchanges. This metric is an indicator that BTC investors are not looking to sell their holdings.

“In bull markets old coins tend to move more. This increases the relative supply of younger coins in the network. At previous $BTC tops, around 50% of the Bitcoin supply was younger than 6 months. We are currently significantly below this level (36%),” Glassnode stated.

Popular BTC analysts Willy Woo captured it on Twitter, pointing out that only 7.3% of BTC has moved since the market cap hit $1 trillion. At press time, the market cap was $1.02 trillion.

Spanish Congress Passes Antifraud Law: Users Will Have to Disclose Crypto Holdings Inside and Outside Spain

Preventing an Energy Crisis Through Blockchain