Bitcoin‘s price has managed to gain traction over the weekend. At the time of writing, Bitcoin was trading at $58,267 with a gain of 3.3% in the last 24 hours. On the weekly and monthly charts, BTC registers losses of 1.8% and gains of 4.0% respectively.

Trader Michaël van de Poppe believes that Bitcoin is stuck at the current price action. The trader has pegged support at $55,000. If BTC manages to hold above that level, it could gain momentum to reach new highs.

As the image above shows, van de Poppe has set $51,100 as the next important support if BTC drops towards the lower range. Otherwise, BTC must break $60,000 before continuing to a new all-time high at $68,000.

For trader “The Wolf of All Streets”, the benchmark cryptocurrency has formed a bull pennant, as shown in the image below. This continuation pattern usually forms when an asset moves from a rally into a period of consolidation. Convergence between the two trends is used to indicate a possible breakout. The trader stated:

Keep in mind that pennants often break support and become flags/parallel channels. So a drop to the low 50ks would likely make an epic bull flag, but the pennant looks juicy for now. 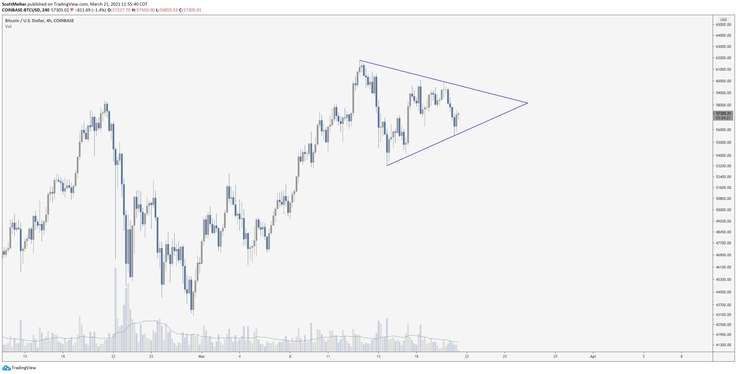 Bitcoin price has not reached its top

With data from analytics firm Santiment, trader Cryptobirb has shown an increase in Bitcoin’s daily active addresses as the cryptocurrency shows gains. In response to the chart below, Santiment stated via its Twitter handle:

(…) current correlation between $BTC’s daily active addresses and price. Look for activity potentially climbing higher as an indication that $60k can and should be breached! 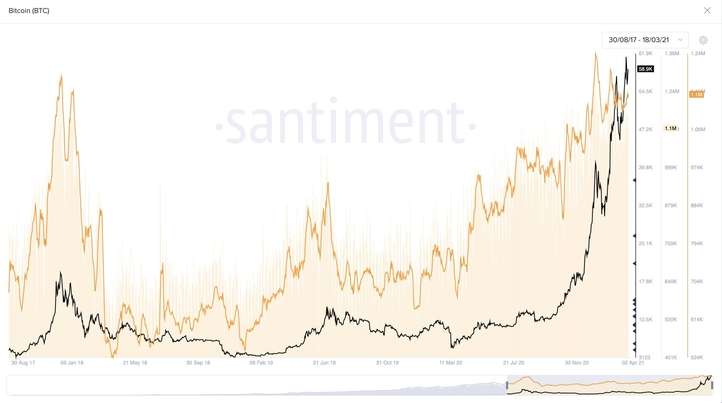 Separately, Glassnode has looked at the number of old coins in circulation in the market. The firm believes that in a bull-run, these coins register greater mobility and can be used to determine if the market is near a top. Currently, the metric is at 36%, at previous tops it has reached 50%. In other words, Bitcoin’s price still has room to grow and reach the top of its current bull market.

In bull markets old coins tend to move more. This increases the relative supply of younger coins in the network.

At previous $BTC tops, around 50% of the #Bitcoin supply was younger than 6 months.

Finally, Willy Woo has taken the UTXO Realized Price Distribution (URPD) metric to determine that 7.3% of Bitcoin’s supply last moved when the price exceeded $54,000 and its capitalization stood at $1 trillion. Therefore, he has stated that the market capitalization and price have received “solid” validation. Woo concluded:

This is pretty solid price validation; $1T is already strongly supported by investors. I’d say there’s a fair chance we’ll never see Bitcoin below $1T again. It’s only been 3 months since Bitcoin broke the $19.7k all-time-high of the last macro cycle. But already 28.7% of bitcoins moved at prices above $19.7k.

Der Beitrag Bitcoin set for a breakout towards $68,000 – These are the key levels to watch erschien zuerst auf Crypto News Flash.