Does Bitcoin have reached a critical point? At least this is what the trader “CryptoHamster” claims via Twitter. After Bitcoin once again failed to break through the $ 60,000 mark in the past few days, the price experienced another setback to below $57,000 today – with BTC already trading at $57,970 again at press time. As the trader analyzes, several factors suggest that Bitcoin has reached an “important point”.

On the bullish side of the argument, Bitcoin continues to test the resistance area at $60,000 and shows an ascending triangle on the daily chart. On the bearish side, however, is the descending triangle on the Relative Strength Index (RSI). Another factor that speaks for an imminent “strong price movement” is that the Bollinger Bands Width is very low. According to “CryptoHamster”, the BTC price should not lose the support line and the EMA 50 on the chart below, otherwise a breakout to the downside could be imminent. 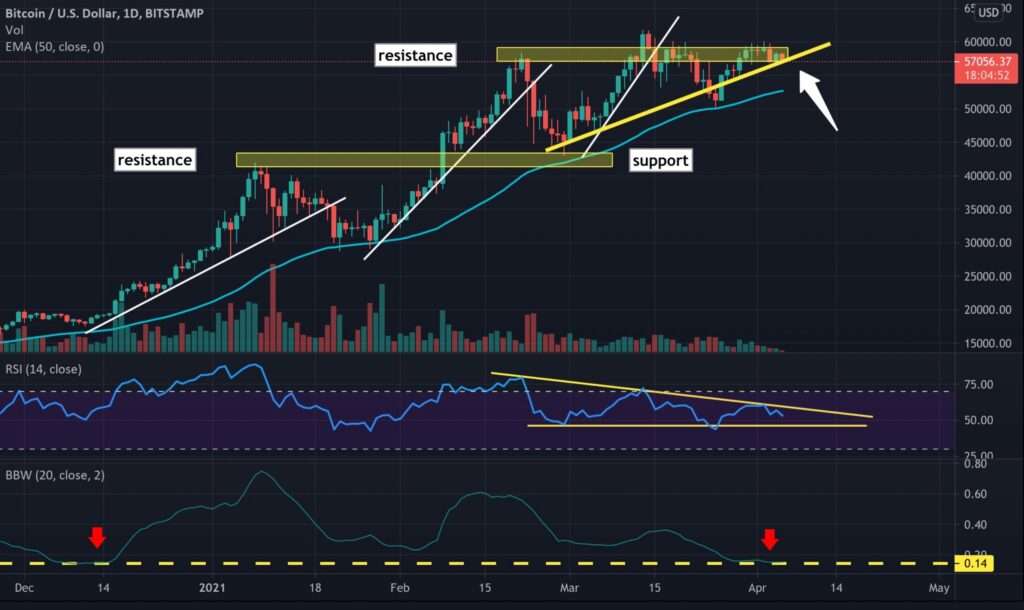 Meanwhile, the sentiment in the crypto market is mostly bullish. Arguably the biggest argument for a continuation of the Bitcoin rally at the moment is that buyers have established the largest on-chain support area at $54,000, since $11,000. As CNF reported yesterday, analyst Willy Woo discussed that BTC typically, forms a strong base of price discovery 2-3 as high above the (previous cycle) all-time high before launching to new bull market highs. “This phase is almost complete,” Woo said.

Santiment also revealed a positive signal. The analyst firm noted that when Bitcoin briefly rose above $60,000 on Friday, many leveraged longs were placed in a moment of FOMO, reflecting strong optimism among investors.

🎢 #Bitcoin returned back to $57k to end the weekend, and many leveraged longs appeared to #FOMO in when $BTC briefly crossed $60k. Read whether a quick return is likely with our study of this funding rate, social sentiment, redistribution metrics, & more! https://t.co/XAgKVPduFm pic.twitter.com/tExImyeGu4

Another bullish signal also comes from Bitcoin miners. For the first time this year, they have hodled more BTC than they have sold on three consecutive days, which should significantly lower the selling pressure in the market and thus favor a rising price.

The next adaptation level for Bitcoin is coming in Q1 2021

There are also some good reasons for this optimism in April. Now that the historically weak March is over, the second quarter will see two investment banking heavyweights, Goldman Sachs and Morgan Stanley, enter the Bitcoin ecosystem and allow their clients to buy BTC.

Goldman Sachs’ Mary Rich, who was recently named global head of digital assets for the bank’s private wealth management division, said in an interview that “some clients” see Bitcoin as a hedge against inflation and “also a large number of clients feel that in some ways we are at the beginning of a new internet.”

A third banking heavyweight, JP Morgan, also recently unveiled a massively bullish price prediction when it said that “above $130,000 should be considered a theoretical long-term Bitcoin price target.”