After spending several days in a downtrend, Bitcoin’s price is settling near its previous support levels. At the time of publication, Bitcoin was trading at $54,218 with a gain of 3.50% in the last 24 hours. On the weekly chart, the cryptocurrency remains in the red with a loss of 6.2% while posting a gain of 9.5% on the monthly chart.

In a market update, trader Michaël van de Poppe predicted that Bitcoin has “bottomed” and could rise to $68,000. However, before developing further “upside potential,” the trader believes the cryptocurrency could move sideways. For a breakout, van de Poppe is watching the region between $57,000 and $60,000 on the 24-hour chart.

Anything above 58,500 is going to bring the markets to new highs. Is that expected? I’m not expecting it to happen at this point, at which point I’m assuming we’ll have a rangebound build.

At the same time, van de Poppe does not rule out the possibility of BTC returning to the high $40,000s once again. On the way up, the cryptocurrency could also encounter resistance in the $54,100 to $56,200 range. He stated:

In support of the bullish thesis, on-chain analyst “Checkmate” has shared data indicating “explosive growth” in new entities entering Bitcoin. Since January 2021, as the chart below shows, in net entity growth has seen an exponential rise. The analyst believes that the consolidation phase in Bitcoin pricing has become a “magnet for new HODLers.” 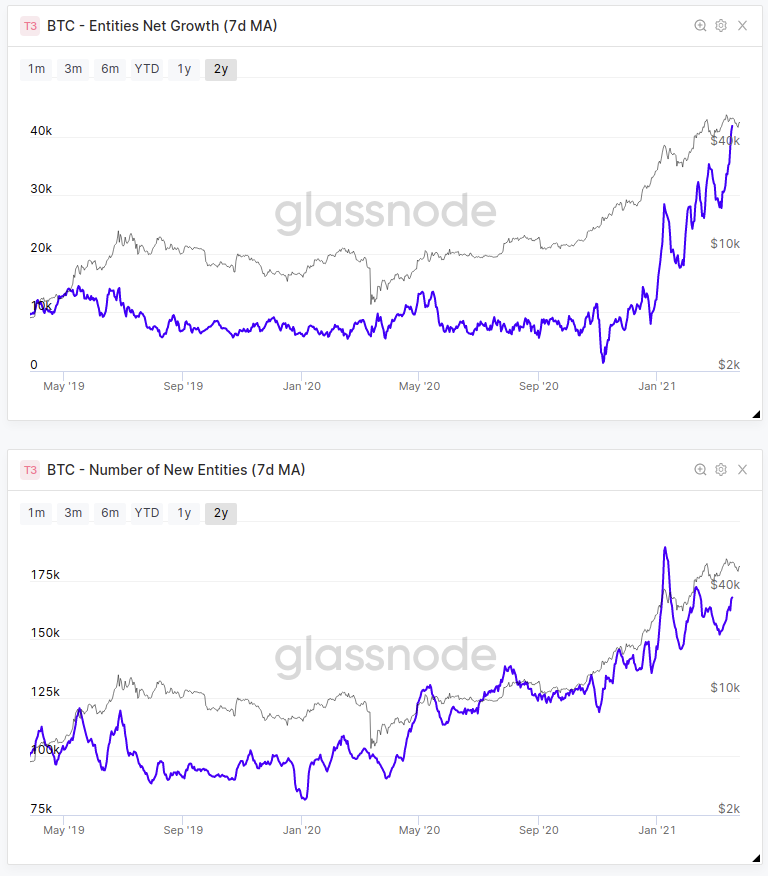 Co-founders of research firm Glassnode, Yan Allemann and Jan Happel, have stated in a report that institutional participation in the crypto market has come at a price. A shift in narratives and “dominant macro-dynamics” has occurred.

While Bitcoin becomes an asset to protect institutions from inflation its performance is also affected by that of the traditional market. In recent weeks this has been evidenced by the intraday correlation between the S&P500 and BTC standing at 0.25. A year ago this metric stood at 0.

In the short term, economies could start to open up after vaccinations against Covid-19. An increase in spending, according to the analysts, would translate into an increase in inflation, while the narrative has favored BTC’s price since 2020. Allemann and Happel stated:

With this excess printing, Bitcoin is already challenging gold as the investor’s choice for an ideal inflation hedge. Net fund flows in the largest gold ETF for example have been negative, with gold outflows totaling -6.8bn USD. Meanwhile in 2020, in Greyscale’s BTC trust alone, inflows outpaced the amount of newly mined Bitcoins in Q4 by 200%.

Plan B, creator of the Stock-to-Flow model for Bitcoin, did its own market update. Comparing the relative strength index (RSI) of the current market with that of previous years, the analyst indicated that “it’s still early.” According to his model, Bitcoin’s price could stand at $500,000 by the end of the year.

Solana Tops Cardano, Ethereum To Become The Most Staked Cryptocurrency

Robinhood To Roll Out Crypto Wallets To 1,000 Users In Phase One