As Bitcoin consolidates near $50,000 after a massive bearish week, a series of positive news bolsters the bull case. First, Cboe BZX has applied to trade shares of a Bitcoin ETF proposed by VanEck; according to a document filed with the U.S. Securities and Exchange Commission (SEC).

The most innovative aspect of Cboe’s BZX proposal is a mechanism they believe is “resistant to price manipulation.” To do this, the Cboe will require investors to deliver a “certain number of bitcoin per share” while allowing them to redeem their shares for BTC. This would be massively bullish, as it would not only trade paper money, but actually Bitcoin to some extent.

As reported by CNF, Canada was the first country in North America to approve a Bitcoin ETF. Since then, the financial product has seen record levels of participation. The Purpose Bitcoin ETF already held more than 10,000 BTC last week. The ETF has even affected Grayscale’s Bitcoin Trust’s premium due to the “loss of its monopoly”, as Messari researcher Mira Christanto stated.

Apparently, there are investors in the United States who have participated in Purpose’s ETF, showing the high demand that exists. Therefore, the drop in the premium could be a result of this factor and not a “market exhaustion”, as it has been historically. 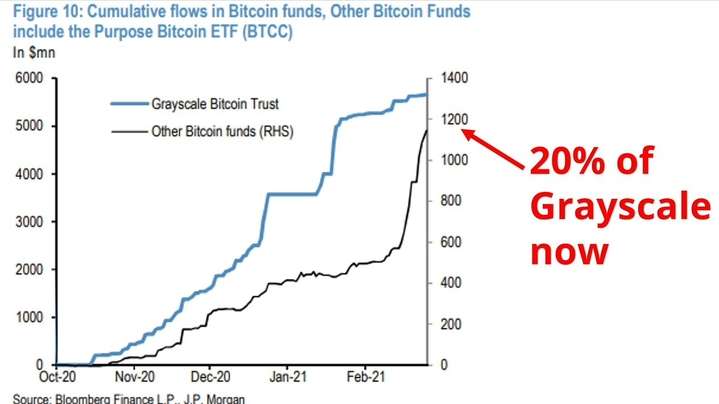 In a report by Reuters, Goldman Sachs Group Inc announced the re-institution of its cryptocurrency trading desk. Starting next week, the desk will be part of the banking institution’s Global Markets division and will be responsible for trading BTC futures for its clients. According to the cited source, Goldman Sachs is also exploring digital asset custody and the “potential for a Bitcoin exchange-traded fund.”

In 2018, Goldman Sachs opened its cryptocurrency trading desk, but its activities were halted during the bear market that extended into 2019. The reintroduction of the desk is due to the growing demand for BTC from institutional investors, Goldman Sachs claimed.

Finally, Twitter has issued a press release disclosing its intention to offer $1.25 billion in convertible notes. Maturing in 2026, the debt will be issued for qualified institutional buyers with semi-annual interest payments. The debt will have the following objective:

Led by Jack Dorsey, known for his pro-Bitcoin stance, the company is speculated to use some money raised in a Bitcoin purchase. Similar to MicroStrategy, this ploy may serve as a way to increase the company’s BTC holdings. In the past, the Michael Saylor led company’s convertible note offerings have received high participation, while some commentators in the crypto space claim that MicroStrategy’s shares are a proxy for a Bitcoin ETF.