After spending weeks in consolidation, Bitcoin‘s price has managed to surpass a new milestone by breaking above $60,000 for the first time. At the time of publication, Bitcoin is trading at $59,843 with gains of 7.08% in the last 24 hours. The weekly and monthly charts are in the green with gains of 22.19% and 33.75% respectively.

Trader Josh Rager registered a surge in Bitcoin buying pressure a few hours ago. This caused the price to abruptly surpass the previous high of $58,300 and shoot above $60,000. Rager predicts a continuation of the rally and marked $75,000 as the next price target.

This is so surreal after years of waiting

Next target will be $75k https://t.co/EtrsSDFHe6

CryptoQuant CEO Ki-Young Ju pointed out that the rally came “from stablecoin buying power” as indicated by the difference between the premium rate of Coinbase’s Pro service and Binance’s spot market price. Journalist Wu Blockchain stated the following about this point:

Bitcoin reached a maximum of 60,445. When Bitcoin broke new highs, there was a huge difference between the price of Coinbase Pro (USD pair) and Binance, premium gap was -332.1 , Which means that giant whales has bought a huge bitcoin spot in Binance, driving up the price. 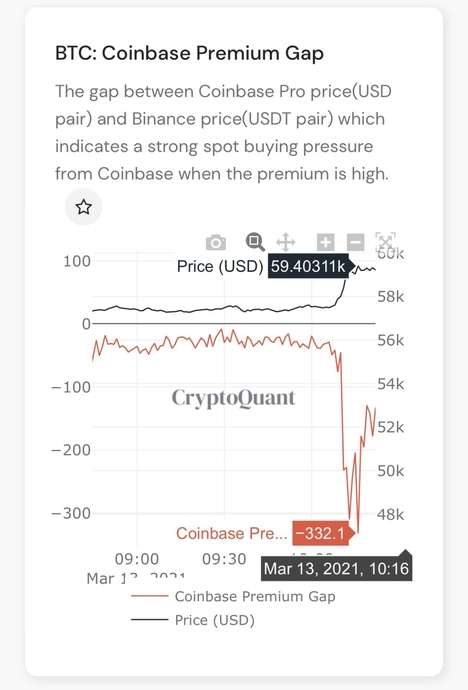 Analyst Lex Moskovski shared data from Glassnode in support of the above thesis. Via Twitter, the analyst stated that the funding rate on the futures market remained low during the rally. Therefore, he concluded that “the current Bitcoin rally is driven by spot buyers.” 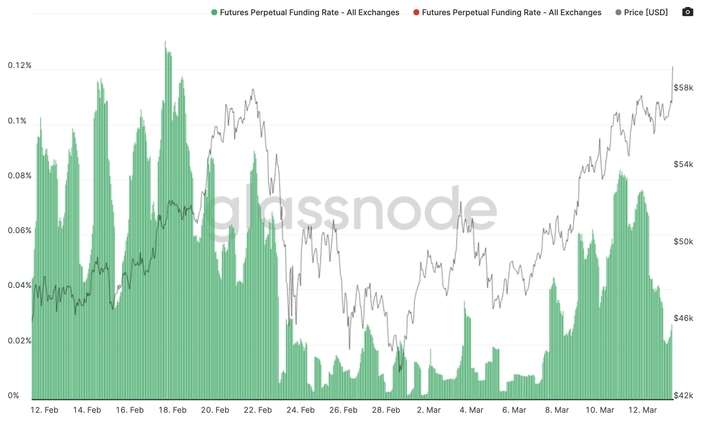 In addition to the increase in demand, there has been news in recent days that may have contributed to the bullish case. Among them is the request made by a member of the French parliament, Jean-Michel Mis, that would allow the Central Bank of France to start buying Bitcoin and other cryptocurrencies. At the moment, the petition has only accumulated about 300 signatures out of some 100,000, and it is likely that legal constraints will prevent the bank from carrying out this initiative. Still, this is pretty big news.

However, no doubt, the most bullish news for Bitcoin is the approval of a new stimulus package by U.S. President Joe Biden’s administration. Estimated at $1.9 trillion, citizens of that country are expected to receive at least $1,400.

In 2020, the passage of the first stimulus package was extremely bullish for Bitcoin and contributed to the macroeconomic environment that put the attention of institutions on the cryptocurrency. In addition to citizens investing their paycheck in BTC, institutions began buying Bitcoin to obtain an asset that would allow them to hedge their wealth from dollar inflation.

Finally, Jan & Yann have shared data on BTC fundamentals that show support for a continuation in the rally. The analyst stated:

Spring is unloading, with fundamentals looking great. Tactical indicators such as Funding rate, SOPR and ASOL are all in very healthy territory, all giving #Bitcoin lots of energy for this next leg up.