One of the best performing cryptocurrencies of the year, Binance Coin, has closed in on yet another record. BNB has now surpassed $600 for the first time ever. The token has gained 75% in the past week alone to cap what has been the best three-month run in its history.

BNB started off the year at just $37, with its market capitalization at just $5.4 billion. Since then, it has been on a parabolic run, setting new records every other week. In 2021, it has gained a massive 1,545% to shoot up the charts and only trail Bitcoin and Ethereum.

BNB’s market cap now stands at $94 billion, $32 billion higher than the fourth-placed XRP and more than twice that of Tether at fifth. It has now surpassed General Motors, Baidu, the CME Group, Dell and Santander in market cap.

Analysts have been racking their brains on what has been behind BNB’s massive price surge. Some believe that it’s the upcoming token burn that has made traders bullish on the coin. Binance CEO Changpeng Zhao announced yesterday that the burn is coming up in a few days. A burning event, in which a project permanently destroys a share of the tokens, serves to reduce the supply of these tokens, and consequently, makes the remaining tokens more valuable.

When you burn coins, they are taken out of circulation forever. It increases the value of the remaining coins.#BNB 🔥 in a few days!

In the previous token burn in January, Binance burned 3.6 million BNB tokens, worth $165 million. This was its largest token burn yet. In the past three years, Binance has burned 13% of the total BNB supply. Zhao pledged to burn 100 million BNB, or roughly half the token’s supply.

Exactly how much faster? We are not 100% sure. The current accelerated burn would put the trajectory to be around 5-8 years to finish the 100 million BNB. But a number of factors could change the accelerated part in the future, including BNB price fluctuations, overall market conditions, and more.

Other analysts believe that the recent Coinbase news regarding its Nasdaq listing has been bullish for BNB. Coinbase is set to list on Wednesday, April 14, becoming the first cryptocurrency exchange to list on the U.S market. While valuations for the company vary, it last traded at a $90 billion valuation on the Nasdaq private market.

The high valuation of Coinbase has led to investors rethinking their stance on Binance, one analyst pointed out. Binance has a bigger ecosystem, more trading pairs, is available in more countries, has bigger profits and even has its own blockchain.

Estimated valuation for me is 80 bill+

One of the biggest price factors for BNB has been the absolute monstrous growth of the Binance Smart Chain. This distributed ledger technology has risen to power decentralized applications that would otherwise run on Ethereum or Polkadot. The ecosystem’s growth owes a lot of its success to the failures of Ethereum, especially high fees and slow transactions. Traders are increasingly seeking alternatives, and BSC has emerged as strong contender.

Binance Smart Chain has seen the rise of DeFi on its network in recent months. Platforms like PancakeSwap (CAKE) have gone on to challenge Ethereum platforms like Uniswap. According to DeFi data platform DeBank, PancakeSwap is the leader in gross value locked in the DeFi sector with $10.5 billion. Ethereum-based Compound follows closely with $10.3 billion. 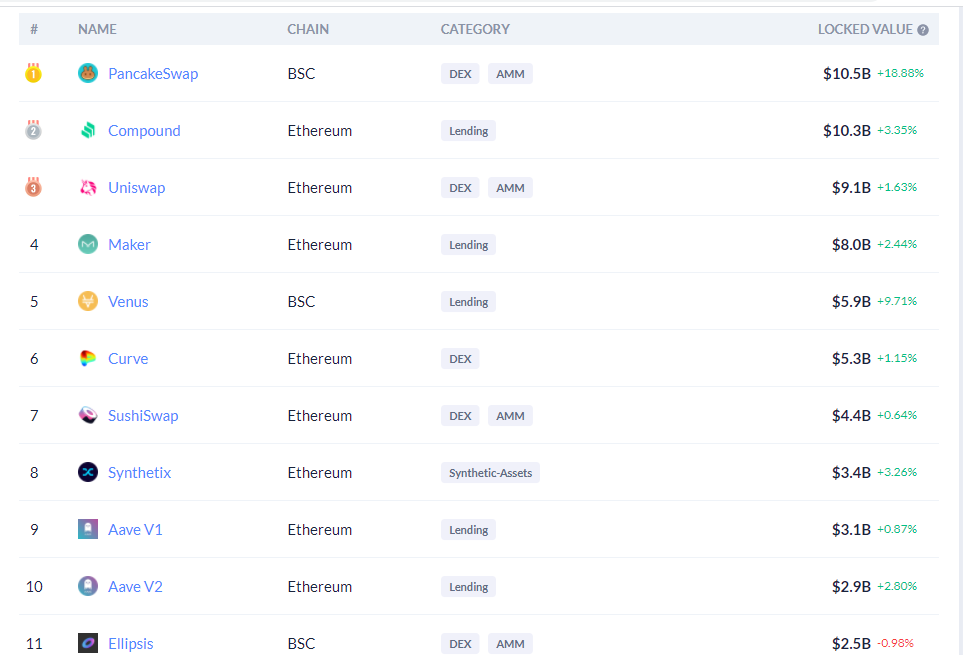 However, despite the rapid growth, leading analytics platform Messari has slammed Binance Smart Chain for centralization. While some tout it as the successor to Ethereum, Messari disagrees. Its lead researcher Ryan Watkins stated:

Every cycle people get hoodwinked by the latest centralized solution to all blockchain problems. Every cycle influencers pump these narratives so they can dump on naïve retail traders when it’s over. BSC is an Ethereum fork with a centralized validator set. That’s it. Nothing more.

If you really think BSC has achieved smart contract supremacy and will become the world’s settlement layer, you are on crack.

Price action will cause people to believe anything.

I don’t care how high BNB or CAKE go, it won’t change that they’re still copycats.

It’s one thing to view these assets as a way to make money, it’s another to view them as innovations that push this industry forward.